Air Bike vs. Spin Bike – Which type of workout bike is better

Marjorie December 12, 2021 Blog Comments Off on Air Bike vs. Spin Bike – Which type of workout bike is better 4,288 Views

Cycling is a great way to improve your body mentally, physically and in many other ways. Moreover, it is a very convenient way to exercise. In fact, many modern workout bikes allow easy home use with just as much effect as the workout would have when undertaken at the gym.

For this reason, this guide focuses on two very popular indoor bike options: the air bike and the spin bike. Here, you will find an in-depth review of what each type of bike has to offer, fundamental features, among other elements. Moreover, we will compare both options before choosing the best kind of bike between them. Read on for more

An air bike is a capable piece of equipment for anyone looking for an efficient and difficult workout. Yes, these bikes are designed specifically to make you really work. Take a look at some of the features and basic functionality of the Air bike.

Also known as the fan bike, air bikes are a great piece of equipment for a wider variety of users. Let’s start with the design and function. This bike was specifically designed in the late 70s for aerobics and cross fit training.

It is made with an upright design that has the seat and handlebars set to ensure your arms and legs are engaged. While on an air bike, your back is straight while your legs and arms are pushing or pulling against the drag.

An Air bike is not built with the typical flywheel design: which we will discuss later on. Resistance on this bike is dependent on the fan which using air, and included design elements generates said resistance.  The air wheel, which is the most dominant feature on an air bike, is equipped with fans that are angled to create drag as you cycle on this bike.

These mechanisms create some chatter, and these kinds of bikes end up kind of noisy. However, this is a nonissue as the noise produced is not problematic and will not interrupt workout sessions.

Interestingly, the seat on such bikes is traditionally wider and allows for a more accommodating seat. The positioning of the handlebars ensures your arms remain engaged throughout the workout session.

Spin bikes are the centerpiece of the popular spin class sessions, hosted by many gyms. However, before you invest in one, it is important that you understand the fundamental principles of the spin bike: take a look.

If you are sensitive to the sensation you will experience on this kind of bike: which many users are, allow us to ease your curiosity.

Riding spin bikes is quite similar to riding a mountain bike and many users describe sessions on spin bikes as a fulfilling cycling workout. On this, the body will bend into an aerodynamic position, allowing you maximum access to the handlebars. This stance isn’t too far off from the regular stance users take on real bicycles.

Anyone looking to burn some calories and cycle their way to fitness can do so spinning. This bike often specifically targets muscle groups including the legs, biceps triceps, back, shoulders and core.

The general design of the spin bike makes them particularly for cyclists looking to train indoors or even users who desire a cyclist-like workout routine.

These bikes are priced pretty fairly, and range from a few hundred dollars, to even thousands of dollars. More expensive spin bikes have heavier flywheel: which is a big deal. This part influences how realistically the bike will recreate an outdoor experience. The average flywheel weight is between 30 to 50 pounds. With it, pedaling is smoother and notably

The most fundamental difference between the air bike and spin bike is a type of resistance build up each system uses. For instance instead of a regular flywheel, the air bike has a fan.

Notably, the resistance to air bikes is progressive. Air bikes are similarly more resistant and far more durable than spin bikes. Not to mean spin bikes won’t last you a long time: simply not as long as air bikes. In fact, Air bikes are very sturdily built, and the right air bike, when handled well could last you years.

On air bikes however, the handlebars heavily affect workouts to deliver a full body workout. Another design difference between these bikes affecting performance is the seats. Yes, the seat on an indoor bike or any bike will influence comfort levels.

Cycling is a very diverse form of working out. The muscle groups engaged, the number of calories burned and the nature of workout are thus influenced heavily by the piece of cycling equipment you choose.

To this effect, while both the Spin and Air bikes will engage different muscle groups: each delivers a unique style of workout.

Air bikes and Spin bikes are widely different indoor bikes. Choosing between either option can be difficult especially if you do not know the difference between these two.

Hi, my name is Marjorie, a health and fitness expert. Sports and fitness have always been my area of expertise since I could remember. For me, one of the greatest things I accomplished is opening my own gym as well as starting this blog on spin bike and fitness. Spin bikes have brought a massive break for me and my clients, they have enabled me to look past some of my client’s many challenges during work out and achieve the best results they can. I would say that I am proud to help people understand the benefits that come with spin bikes when it comes to fitness and health and how to find the best one for the cause.
Previous Best Spin Bikes Under $1000
Next Best Recumbent Bike For Bad Knees (Everything You Need to Know!)

What Is a Spin Bike? (Everything You Need to Know!)

Can I cycle with lower back pain? (Everything You Need to Know!)

Are spin bikes good cardio? (Everything You Need to Know!)

Should I buy a recumbent exercise bike? (Everything You Need to Know!) 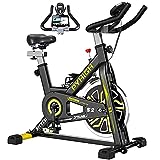 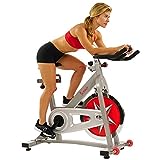 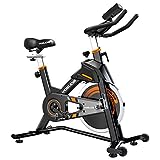 Powered by WordPress | Designed by TieLabs
© Copyright 2022, All Rights Reserved